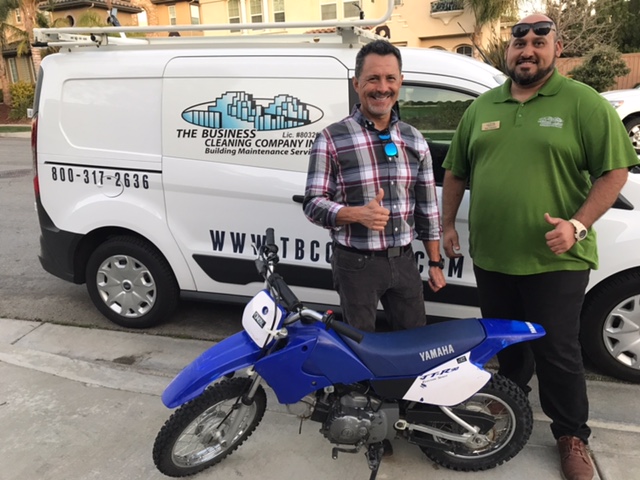 With our recent summer-like weather, who wouldn’t want to be outdoors?! For The Business Cleaning Company’s Jose Luevano, this weather was the perfect opportunity to have some quality family time. As a family tradition, Jose headed to Temecula,CA so that his kids could enjoy a day of riding dirt bikes.

For Jose, his Saturday afternoon seemed perfect: an entire day of riding dirt bikes, family bonding, and beautiful weather. After an eventful day, Jose packed up his kid’s dirt bike & headed back to San Diego, which is almost an hour trek from Temecula. Tired from a long day, Jose decided to leave his kids’ dirt bike on the back of his truck and unload it the next day. He felt comfortable doing so because the bike was securely locked up in the back of his truck and his truck was parked inside of his apartment complex.

To Jose’s dismay, he woke up to not only a stolen dirt bike but a damaged vehicle as well; the dirt bike was forced off the truck. But what was even more heartbreaking for Jose was the look on his son’s face when he realized he didn’t have a dirt bike anymore.

The next few days Jose spent his lunches at work filing police reports and in constant communication with his wife to see if they could somehow hunt down the stolen dirt bike. After many days of searching, Jose realized he would not be able to find the stolen bike & decided to buy a new one. But even finding a new bike became a challenge for Jose & he began to get somewhat discouraged.

After seeing how much getting this dirt bike meant to Jose, our very own CEO Miguel Boggiano decided to take matters into his own hands! Within a few days, Miguel was able to find & purchase a new bike for Jose’s kids to ride in the meantime. The joy that Jose had on his face when he saw the bike was heartwarming, but the reaction that his kids (especially his son) had on their faces was priceless!

Here at The Business Cleaning Company, not only do we value and strive for customer satisfaction, but we also value our employee’s happiness! As a company one should always strive to keep their employees happy, they are the backbone that helps the company operate day to day.

If you haven’t done so already today, I encourage you to tell your employees that you appreciate their hard work. I guarantee you that this will make their weekend!